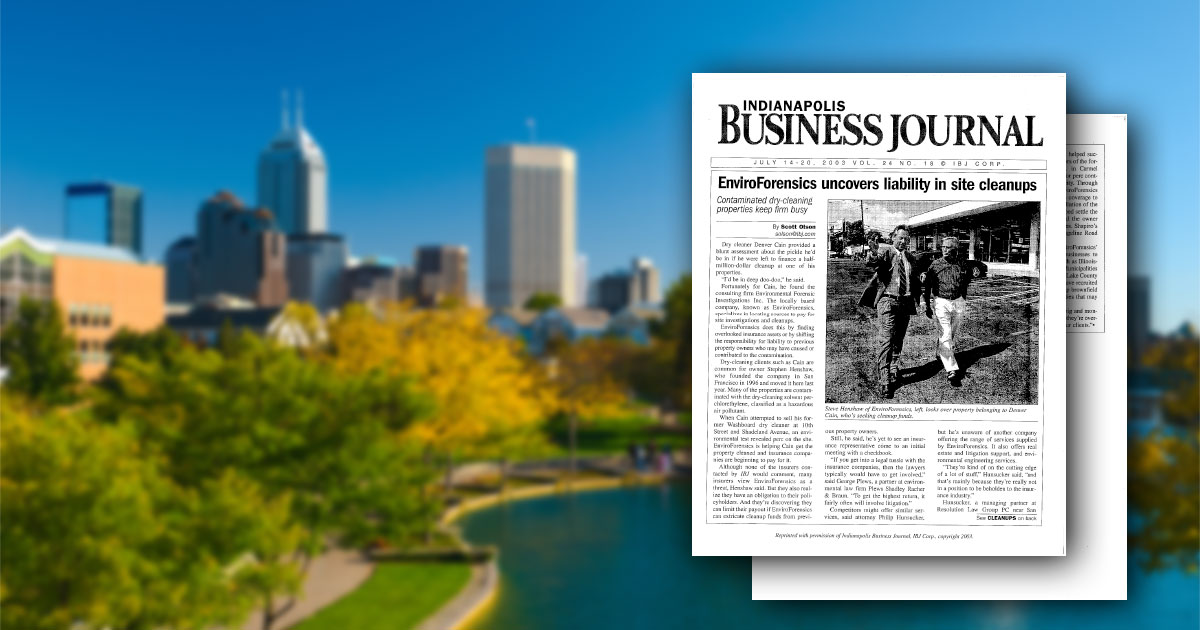 Dry cleaner Denver Cain provided a blunt assessment about the pickle he’d be in if he were left to finance a half-million-dollar cleanup at one of his properties.

Fortunately for Cain, he found the consulting firm Environmental Forensic Investigations Inc. The locally based company, known as EnviroForensics, specializes in locating sources to pay for site investigations and cleanups.

EnviroForensics does this by finding overlooked insurance assets or by shifting the responsibility for liability to previous property owners who may have caused or contributed to the contamination.

Dry-cleaning clients such as Cain are common for owner Stephen Henshaw, who founded the company in San Francisco in 1996 and moved it here last year. Many of the properties are contaminated with the dry-cleaning solvent perchlorethylene, classified as a hazardous air pollutant.

When Cain attempted to sell his former Washboard dry cleaner at 10th Street and Shadeland Avenue, an environmental test revealed perc on the site. EnviroForensics is helping Cain get the property cleaned and insurance companies are beginning to pay for it.

Although none of the insurers contacted by IBJ would comment, many insurers view EnviroForensics as a threat, Henshaw said. But they also realize they have an obligation to their policyholders. And they’re discovering they can limit their payout if EnviroForensics can extricate cleanup funds from previous property owners.

Still, he said, he’s yet to see an insurance representative come to an initial meeting with a checkbook.

“If you get into a legal tussle with the insurance companies, then the lawyers typically would have to get involved,” said George Plews, a partner at environmental law firm Plews Shadley Racher & Braun. “To get the highest return, it fairly often will involve litigation.”

“They’re kind of on the cutting edge of a lot of stuff,” Hunsucker said, “and that’s mainly because they’re really not in a position to be beholden to the insurance industry.”

Hunsucker, a managing partner at Resolution Law Group PC near San Francisco, has partnered with EnviroForensics on projects. Henshaw, an Indianapolis native, started his company in San Francisco. Last month, the Resolution Law Group opened its Hunsucker & Goodstein division in Indianapolis. The move likely will bring other partnering opportunities, said Henshaw, who is exploring the possibility of opening a location in Washington, D.C.

Besides Indianapolis, EnviroForensics has offices in Chicago, Los Angeles, San Francisco and Portland, Ore. Nationally, the company has 45 employees, including 11 in the downtown Stutz Building. Its revenue, a percentage of the money it finds for its clients, increased from $6.3 million in 2001 to $7.5 million last year.

The jump is due largely to targeting dry cleaners and adding the local office. Henshaw markets EnviroForensics through seminars and national trade magazines such as Fabricare and National Clothesline.

Locally, EnviroForensics helped successfully defend the operators of the former Village Cleaners Inc. in Carmel against a cleanup demand for perc contamination brought by the city. Through its investigative efforts, EnviroForensics located historical insurance coverage to fund the defense and remediation of the property. The company helped settle the matter in nine months, and the owner paid only $5,000 in expenses. Shapiro’s Delicatessen on South Rangeline Road was built on the property.

Besides dry cleaners, EnviroForensics’ clients range from small businesses to Fortune 500 companies, such as Illinois-based PepsiAmericas Inc. Municipalities are part of the clientele, too. Lake County and the city of Hammond have recruited the company to help clean up brownfield sites and abandoned properties that may be contaminated.

“The sites aren’t always big and monstrous,” Henshaw said, “but they’re overwhelming, financially, for our clients.”