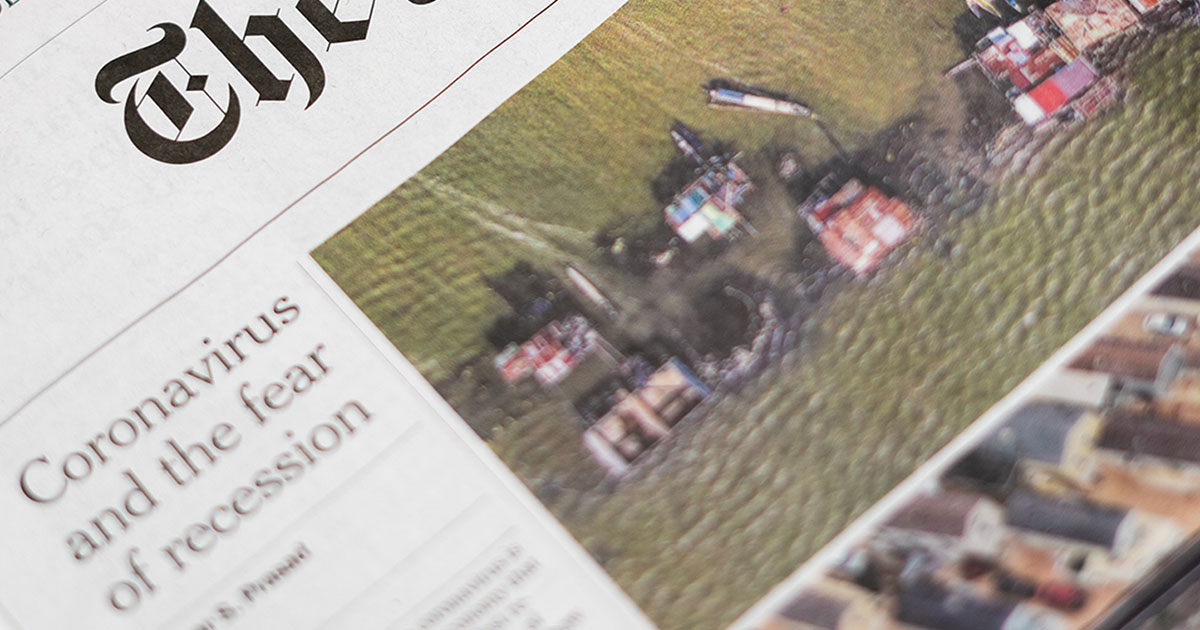 As I write this latest installment of The Environmental Corner in mid-March, we are all watching and participating in some pretty turbulent times related to COVID-19. Outside of the fears related to our personal health and our loved ones, the specter of looming economic instability over the coming months has added insult to injury. As I read the comments in the Cleaner & Launderer Community on Facebook, I see many owners and operators of drycleaning businesses concerned about reductions in customers, forced closures and the overall public response to a perceived inevitable recession. Like many of you, I’m concerned about an economic downturn; but also, like many of you, I remember what we went through back in 2008. Our team saw first-hand how a major recession impacted the environmental cleanup process, our clients, and ultimately our own business. This month, I want to share my reflections on what those economic impacts looked like. It’s not peaches and cream, but there is a glimmer of hope.

The Great Recession of 2008, or the “Sub-Prime Mortgage Crisis”, began completely differently than this new financial crisis, but the initial result will be the same: a period of high unemployment, unstable markets, and lower profitability. We are already hearing familiar talk of government bailouts and tax relief programs to bolster businesses during the inevitable downturn. Financial analysts are proposing that the next steps in the COVID-19 response will determine if the recovery from this next recession will be similar to the four-year climb we saw after 2008, or perhaps something shorter. Likewise, the level to which this next recession impacts your environmental cleanup plans, and how those considerations impact your business’ bottom line can be influenced by your attention to it now. It’s understandable that other business matters take priority during economically turbulent times, but that could be detrimental from what we learned in the years following the 2008 crisis should the predicted 2020 recession continue to take shape.

Here are my three main takeaways for drycleaners from the 2008 recession.

1. NO REGULATORY REPRIEVE FOR ENVIRONMENTAL ISSUES

If you are currently in the process of an environmental project, you can expect that the regulatory agency won’t back off during an economic downturn. To them it doesn’t matter whether or not you are having business problems. That seems harsh, but here’s how I’ve seen it play out.

Government employees, such as those at the state or federal environmental agency, are like any other worker. When unemployment is increasing or at a high level, they get fearful for their job and they buckle down to be seen as high performers to their supervisors. Since they work for a regulatory agency, buckling down means increasing their level of regulation and oversight. We did see several hiring freezes with agencies, but we did not see layoffs. So, in fact, after 2008 we actually saw a net increase in regulatory demands. The result of the increased regulation was an increase in the annual cost of ongoing environmental projects. We also saw an increase in the number of fines and stipulated penalties being imposed upon our clients for lack of compliance with regulatory demands. One could surmise that this was an involuntary result of increased financial pressures within the regulatory agency, where fines and oversight fees are a source of income for them. I’m not suggesting that this was a calculated strategy by the agencies; but rather the net result, and that’s what we saw.

The bottom line here is that you shouldn’t expect a reprieve from the need to continue your environmental investigation and cleanup process during a wide-spread economic crisis.

2. AN INCREASE IN DEMAND FOR TROUBLED ASSETS

As soon as the economy hit bottom after 2008, we saw an increase in the number of investors looking to capitalize on depressed real estate values. Initially, the focus was on properties that had been foreclosed upon by lending institutions after the owner was forced to default on the mortgage. Unfortunately, we did have clients who had lost their properties in that way. When business gets depressed, this can happen, of course. In addition to the foreclosed properties being bought up, we also saw an increase in the number of owners who were willing to sell their properties to investors at a discount to get cash back into their stressed businesses.

Regardless of the reason, when there is a commercial property transaction, especially of a drycleaner property, the Phase I and Phase II due diligence process is performed, and environmental contamination issues come to light. While a truly motivated purchaser is typically willing to spend the money upfront to conduct the Phase I and Phase II assessments, the owner and/or operator of the drycleaner will be the identified responsible party for any impacts found. If the responsible party doesn’t have the financial means to address those impacts, the deal may fall through and the seller won’t get the benefit of the sale, or the buyer may use those impacts as leverage to lower the price to their advantage. In certain situations, we’ve seen properties sold for an extremely low price when the owner is seriously cash strapped. I’m sure that your current plans don’t include being in either of the categories mentioned here, but you never know how severe this next recession will be or how long it will last.

3. A FOCUS ON ALTERNATIVE FUNDING SOURCES AS A SOLUTION

Based on the multitude of factors discussed above, as well as the overall tendency to tighten belts during economic downturns, we saw an increase in the number of businesses looking for creative ways to offset losses or a decrease in profitability. We saw this a lot. One great example that we saw is delivery or transportation based businesses adding fuel surcharges to their base fees. We saw things like the technology surcharges that pop up on invoices from vendors who heavily utilize software in their services. We saw an overall increase in the granularity of invoices or bills from businesses who were attempting to look for any way possible to pass on costs to their customers. Mostly, this was in the business to business (B2B) space, and not so much in the business to consumer (B2C) space. Many drycleaners in the B2C world know how damaging it can be to pass costs on to their customers if not nuanced gently. The point here is that we saw our clients looking under the corner of every rug and behind every couch cushion to find that extra source of income or savings to help get them through until the market rebounded after 2008.

A GLIMMER OF HOPE FOR DRYCLEANING BUSINESSES

There was one thing that we did not see change during the Great Recession of 2008 and its recovery that helped thousands of small businesses and drycleaners: old commercial general liability policies.

Learn how old commercial general liability policies can help you.

This was a big deal for a lot of people because old insurance policies can be used as financial assets for businesses. Whether business owners were looking for help in fending off increases in regulatory demands, in maintaining the value of their real estate investments, or just looking for extra cash as a result of the financial crisis, they increased their desire and willingness to look for their old insurance policies. A lot of things are impacted by a sizeable recession, but one thing that is only rarely affected is case law. Your state’s case law requires insurance carriers to honor these old commercial general liability policies to the interpreted extent when a proper claim is filed.

You may be wondering “Is it worth your time to look for your old commercial general liability policies now, before things get too wonky?” If you don’t have any luck, you can hire professional help to perform insurance archeology and hunt them down. Not only are old insurance policies important during tough times but being fully covered for current operations is important as well. While I’m not in the insurance business, we’ve all been saved by an insurance policy a time or two, either professionally or personally. Now is an important time to look at your old coverage and your current coverage, evaluate your deductibles and limits, and make a call to your current carrier if you feel like you wouldn’t be able to take a hit should an unforeseen event transpire. There are many dedicated agents and insurance companies that have supported the drycleaning industry through the years. I’m sure they would be happy to help you figure things out.

As a final thought, the most important takeaway that we saw in the drycleaning industry during the last recession was that the industry came together to support each other and produce creative ways to weather the storm. Operators, vendors, suppliers, and allied trades worked side by side for the benefit of the industry. The time is now for a repeat performance on that track. We’re all in this together, no matter how trying the times ahead become.

Do you have any questions? Send me an email at jcarnahan@enviroforensics.com or fill out our contact form.