EnviroForensics said “yes” to a request for volunteers from the Hoosier Environmental Council.

Their assignment; find traces of lead poisoning in the ground at Muncie parks, playgrounds and community gardens.

Vick Webb, our corporate health and safety manager, and Nick Hill, senior project manager, spent a day in Muncie working alongside the HEC ‘s environmental health and water policy director Dr. Indra Frank (a frequent collaborator) and a Muncie team headed by Jenni Marsh, president and CEO of the United Way of Muncie and Delaware County.

Marsh says the effort was spurred by worries about detrimental effects of high levels of lead in the blood of children; levels that may harm brain development in pre-kindergarten children, during the most important time of brain development.

Marsh says. “We discovered: In 2014, 7% of the children tested in Delaware County had elevated BLLs. The national average of children with elevated BLL of 5 micrograms per deciliter is 2.6%. Our community’s average was more than twice that amount.”

The team fanned out to five Muncie parks and playgrounds, visiting every zip code in Delaware County’s Center Township. Using a hand auger and hand trowel, Vick and Nick extracted samples from the ground at three different locations in each park. The samples ranged from 2 inches to 8 inches deep. They were added to the team’s total and evaluated by HEC consultant Mike Ketterer of the Metropolitan State University of Denver’s chemistry department.

Ketterer says, “The majority of soil samples tested low for lead content. We did not find levels detrimental to public health.”

More testing lies ahead, but these preliminary results were “very good news,” says Dr. Frank of the HEC.

“Given the soil contamination that has been seen in other cities with similar industries, it was a tremendous relief to find only a limited number of samples with elevated lead, and those elevations were still within the EPA’s recommended limit for a playground of 400 parts per million.”

Dr. Frank adds, “For people in the center of Muncie and southern neighborhoods, I would recommend testing soil in vegetable gardens, since a few samples exceeded the limit for gardening of 200 ppm.”

The United Way’s Marsh says, “I must admit I am very surprised at how low the lead levels were. I thought we would see significantly higher parts-per-million because of their proximity to industry and lead contaminators.”

Marsh says the local committee — comprised of the United Way, City of Muncie, Ready by 5 and the Muncie Action Plan will discuss the next steps for reducing lead levels in Muncie.

And, she thanks everyone who volunteered their time and efforts. Specifically, she told Vick and Nick, “What a cool company you work for—that allows that kind of service—and what cool people you all are for taking EnviroForensics up on this opportunity!”

Marsh adds, “Each of you have worked on behalf of Delaware County’s children.” 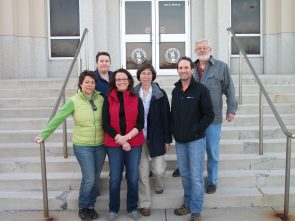