Every May, the National Register of Historic Places celebrates National Preservation Month for the purpose of instilling community pride and to show the social and economic benefits of historic preservation.

As an environmental consulting firm with a deep respect for history and community, EnviroForensics promotes the adaptive reuse of historic buildings. We believe that redevelopment often times brings much-needed economic relief to depressed areas, and when possible the preservation of timeless architectural design provides a beneficial window to the past.

To show our support for National Preservation Month, our Indianapolis team has compiled some photos and stories of our favorite historic structures right here in Indiana. 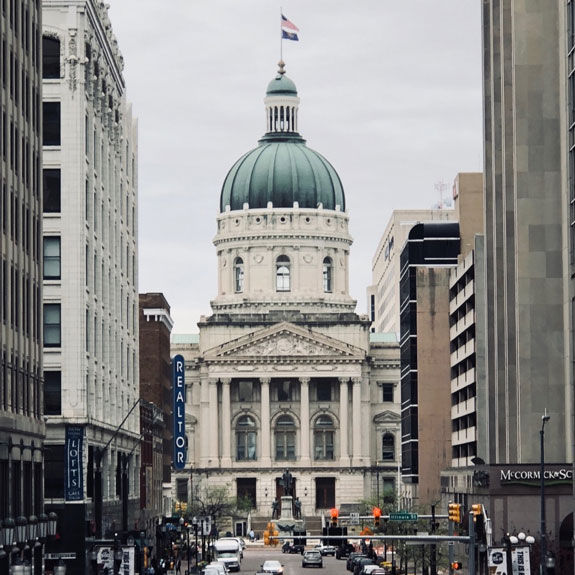 Indianapolis, Indiana | View from the Soldiers’ and Sailors’ Monument.

Designed by Hoosier architect Edwin May in 1888, the Indiana Statehouse is the fifth iteration and sits at 200 West Washington Street. It houses the Indiana General Assembly, the office of the Governor of Indiana, the Supreme Court of Indiana and other state officials. The interior was modeled in the Italian Renaissance style. When possible, native Indiana materials were used. Doors are made of Indiana oak, and Indiana limestone was used throughout the structure. Over 40 pieces of public art spanning more than 130 years is available to the public. There’s also a time capsule bored into the cornerstone with forty-two items. 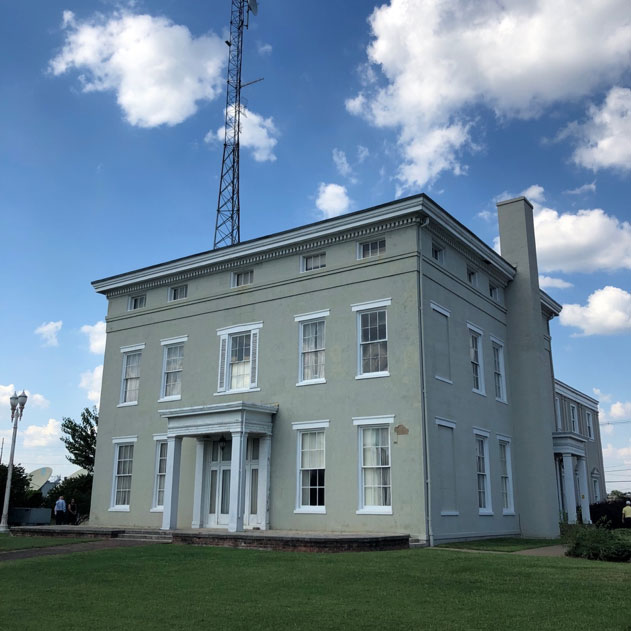 Completed in 1849, the Willard Carpenter House at 405 Carpenter Street is built of brick and stone, a fine example of Georgian architecture. Materials came from nearby or were shipped down the Ohio River from Lawrenceburg, Indiana. Willard Carpenter was known as Evansville’s “pioneer of public charity,” who acted as an agent for the Underground Railroad before the Civil War. The house was one of the first stops after making it across the Ohio River. A stone tunnel led from the river three blocks away north to the Carpenters basement, where people hid until they could be relayed to stations further north. The Carpenter House was added to the National Register of Historic Places in 1978. 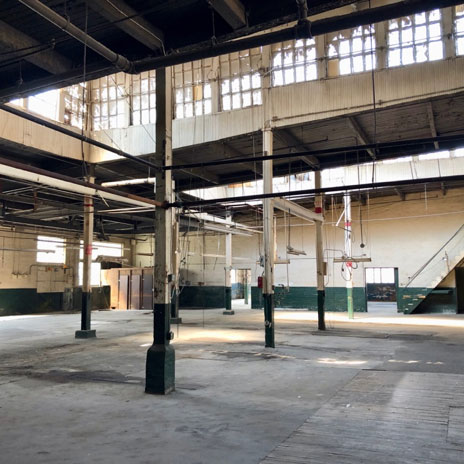 Evansville, Indiana | View from inside.

Pearls Laundry started in 1896 by Al Rust and Daniel Korb and it has been based at the 414-432 Market Street since 1912. It did deliveries by horse and buggy until 1938.  In 2017, Pearl Cleaners closed its century-old Downtown Evansville location, amid litigation by the neighboring property, which says it is owed a reimbursement of environmental contamination costs. The business license was purchased, and customers were directed to a new location on Evansville’s East Side.

Like many dry cleaners, Pearls had chlorinated solvent contamination. The contaminated property was purchased by an investor, who retained EnviroForensics to conduct insurance archeology and the environmental investigation and cleanup.  The environmental cleanup is almost complete at the historical Pearl Cleaner building in Evansville’s downtown TIF district. It’s undergoing adaptive reuse to become a part of the dynamic downtown community, while EnviroForensics conducts remedial actions necessary to get the site through the regulatory closure process.

EnviroForensics’ headquarters at 825 N. Capitol Avenue was originally a transmission repair shop dating back to the 1930s. The 23,000 sq. ft. structure had environmental contamination left behind by auto repair operations. This complicated redevelopment for real estate developers, but, as an expert environmental engineering company, we knew how to remediate the environmental contamination and saw the value of investing in the property and the North Meridian neighborhood. We conducted insurance archeology to locate the historical insurance policies to fund the site investigation and cleanup of the contamination. Once mitigation infrastructure was in place, we started to bring our vision for a revitalized headquarters to life. Now, the building houses more than 70 employees who are committed to our surrounding community.

For more on how we revitalized the historical building, visit https://www.enviroforensics.com/blog/enviroforensics-hq-brownfields-site/ 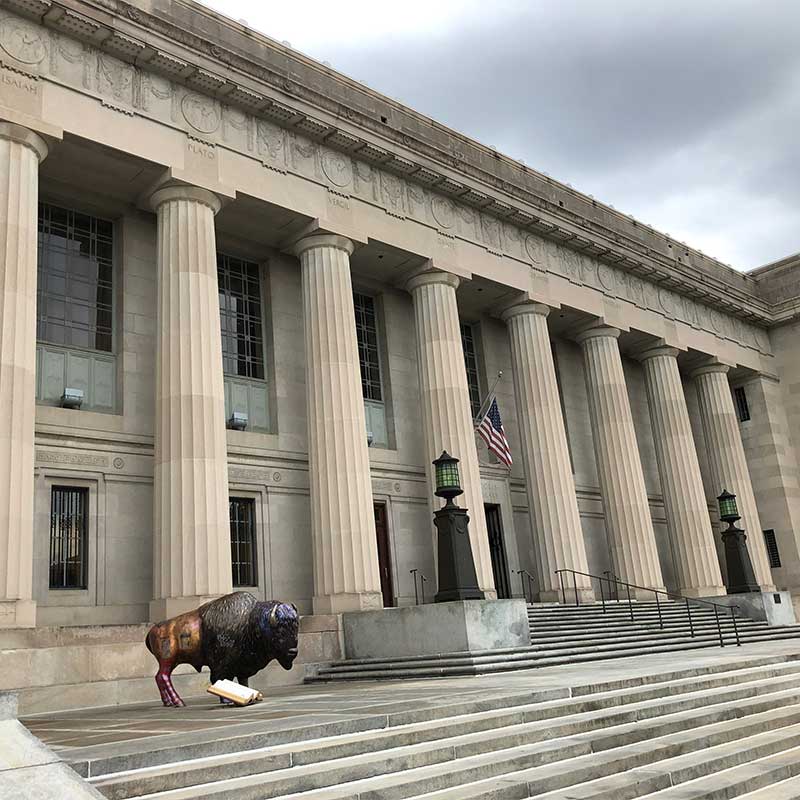 The original Central Library Building, located just a few blocks east of the EnviroForensics Headquarters, was completed in 1917. The library was designed by French-born architect Paul Philippe Cret, whose other famous work includes the Main Building on the Campus of the University of Texas and the Rodin Museum in Philadelphia. A new six-story curved-glass and steel addition was built onto the original structure in 2001, but issues with the project forced the grand opening of the new atrium back. The new addition opened in December of 2007. The Central Library is home to the Nina Mason Pulliam Indianapolis Special Collections Room, which houses a collection of archival manuscripts and autographed editions from some of the area’s most famous literary minds, including Kurt Vonnegut, James Whitcomb Riley, and Booth Tarkington. 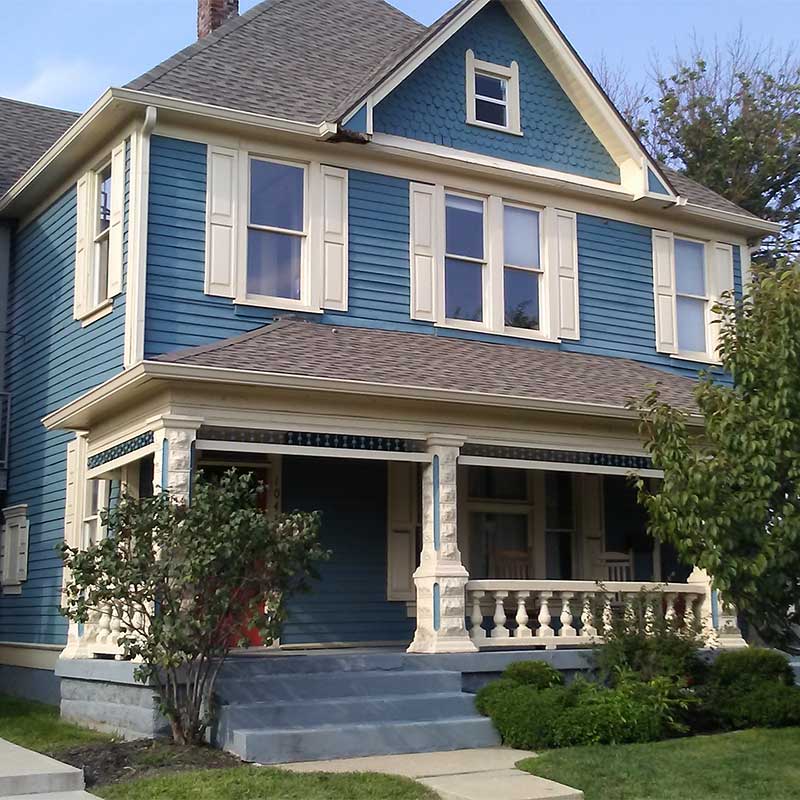 Andrea Bryan’s great-grandfather, Conrad Hirschman, was born in 1854 in Wurttemberg, Germany and emigrated to the United States in 1880.  He built this house for his wife, Emma, and their children, one of which was Andrea’s grandmother, Ursula. She married and lived in this house her entire life (after her emigration) and all three of her children were born in the back bedroom of the house, one of which was Andrea’s Father.  Ursula’s husband, Andrea’s Grandfather, fought in WWI and came home after the war. He died in the flu epidemic shortly thereafter and my Grandmother never remarried. All three of Ursula’s sons went into the Navy and served in WWII.

The house was built in 1900 at 3100 sq. ft. with an attic, a basement, and a crawl space. The current owner is Angie’s List who used it for office space at one time. There is a plaque inside with the historical information related to Andrea’s family. 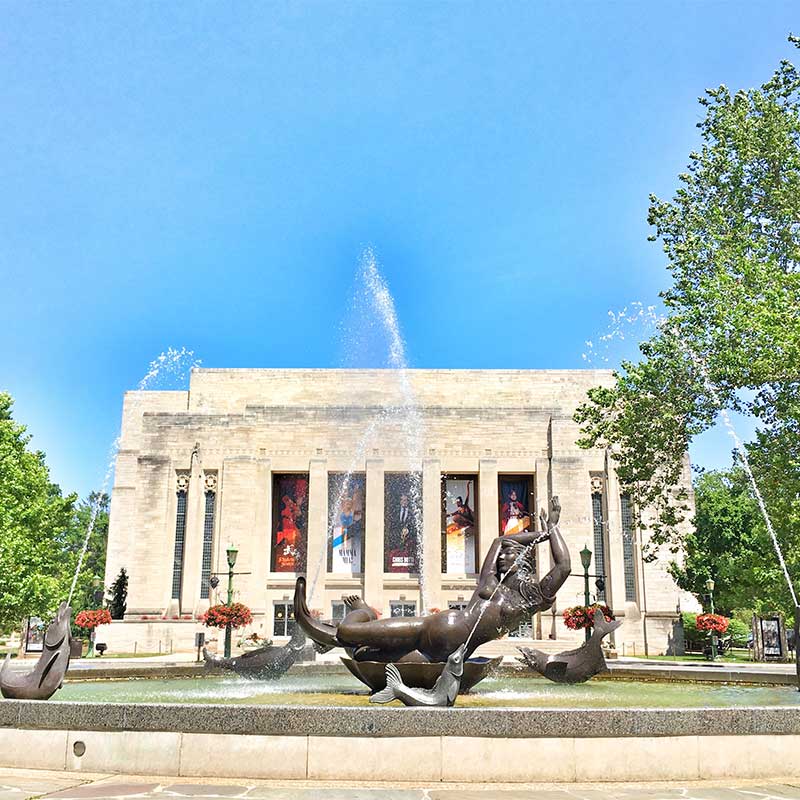 The Indiana University Auditorium opened in 1941 as a part of the Federal Works Agency Project. At the time, the country was still recovering from the Great Depression, and most universities were making cuts to their arts programs. Indiana University went in a different direction, building the Lilly Library, the Fine Arts Building, and the Jacobs School of Music; widely regarded as one of the world’s top music schools. The IU Auditorium was the first planned and constructed of this era. It was constructed out of locally quarried Indiana Limestone. The venue seats 3,200 people and has hosted acts from all over the world, including the Metropolitan Opera, the touring troupe of Les Miserables, and Jerry Seinfeld. 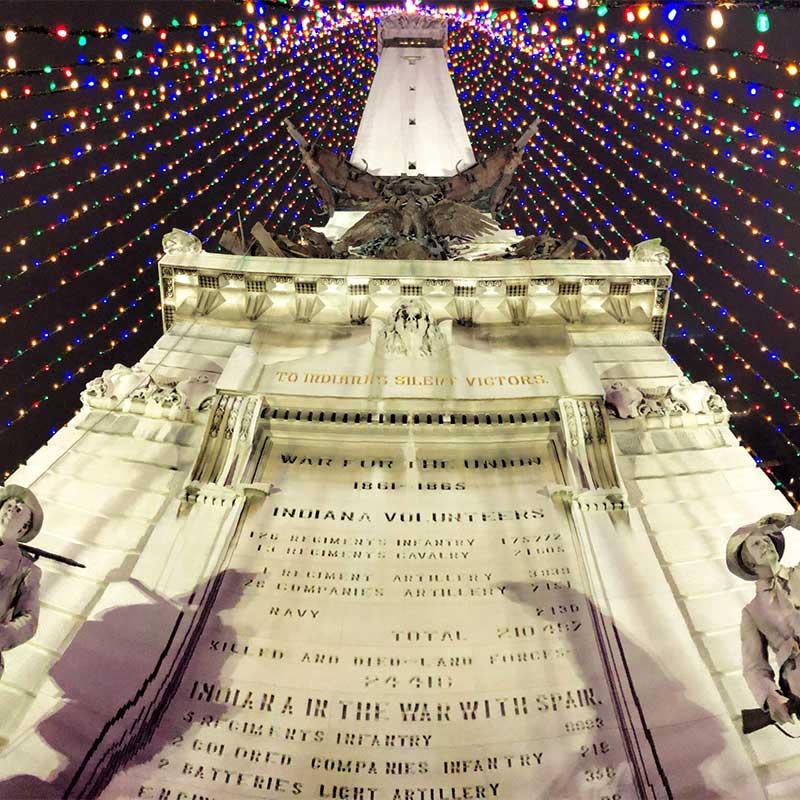 The Soldiers’ and Sailor’s Monument is one of the most iconic structures in Indianapolis. The neo-classical obelisk was built over a 13-year period between 1888 and 1902. It was constructed in honor of Hoosier veterans of the American Civil War, Revolutionary War, War of 1812, Mexican-American War, and the Spanish-American War. During the dedication ceremony, a group of musicians played “The Messiah of the Nations,” a piece written for the occasion by the famed composer, John Phillip Sousa. The monument is located at the intersection of Meridian and Market Streets at the center of Downtown Indianapolis. During the holiday season, it is transformed into a giant Christmas tree known as the “Circle of Lights” (pictured), which at 284 ½ feet tall, makes it the tallest Christmas Tree in America each year. The Soldiers’ and Sailors’ Monument was added to the National Register of Historic Places in 1973. 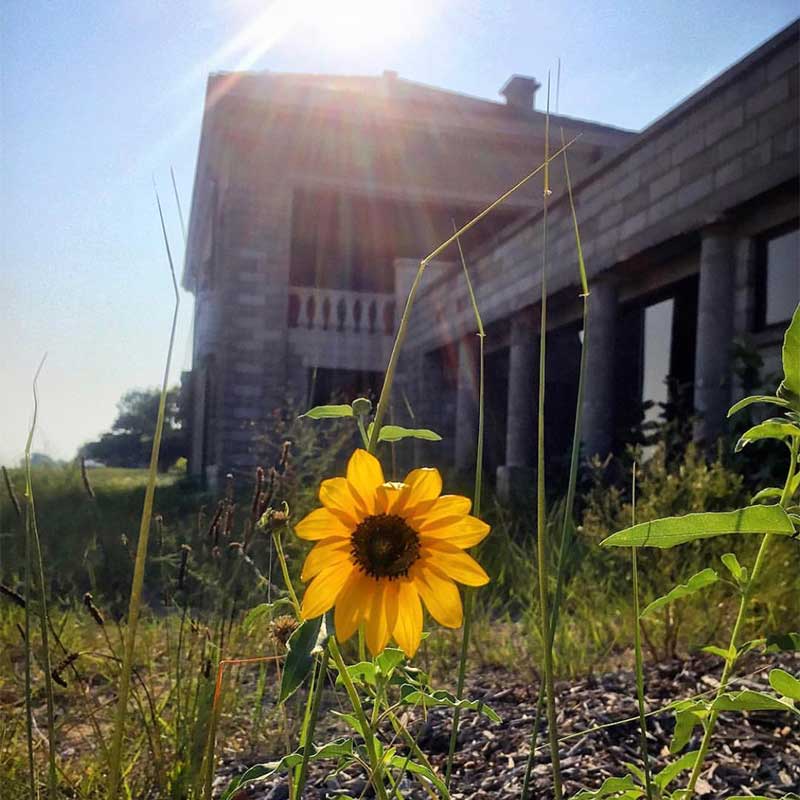 The Gary Bathing Beach Aquatorium was constructed in 1921. It sits at the southernmost point of Lake Michigan in the Miller Beach neighborhood of Gary. It was originally built to serve as a bathroom and changing area for beachgoers but was shut down to the public in 1971 due to a lack of upkeep and disrepair. The building was renovated and reopened as the “Chanute Aquatorium” in the late 1990s and houses a museum honoring the achievements of Octave Chanute, the grandfather of modern flight, and the Tuskegee Airmen. The Gary Aquatorium was placed on the National Register of Historic Places in 1994.